I missed the Titanics (sorry) but I figure it's OK because a great deal has already been written about those guys in this as well as other local publications. On the other hand, NOT NEARLY ENOUGH has been written about the genius that is the band Mente. My first exposure to the band was during a local music show when I was blown into the seat of my sofa upon hearing the "Scrod". In the course of 3 minutes and some seconds, visionaries reinvented rock and roll to celebrate probably the greatest unsung hero of the ocean--the three-chord rocker of the sea, if you will--so future generations can remember that "scrodliness is next to godliness." m's is the kind of song that makes pimply 8th graders want to start bands and grow Their hairs, and probably the only song in The brief history of R and R to use the verb "eke" ("we eke a living out from the sea") and really mean it.

But despite all of this unabashed Mente-worship and almost a full week of getting psyched to see them in action, by the time Friday rolled around I had come down with a case of the flu, it was raining and I figured I could always catch Mente some other time I decided that I would take a nap and see how I felt and when I woke up, there was a message on my answering machine saying "This is John Murphy calling to let you know That you re on the Mente guest list". So I decided that this was a sign: my health could get better some other time but this life is too short to miss Mente, so I braved the rain and caught the T to the Rat. 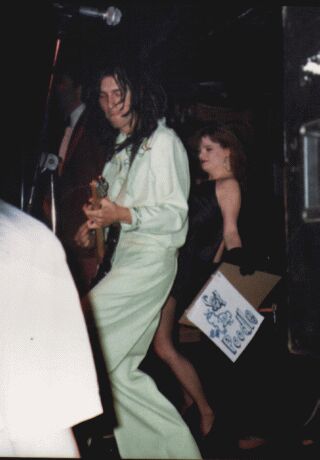 Wigs and polyester, tag-team drummers (one of who was in a gorilla suit) and a sultry placard-toting rock chick (Cathy Houlihan), the band was visually and aurally spectacular. After belting out a number of classics ( "Scrod" , "Bobby Orr"), the band tried out a batch of new songs with references ranging from the historical (a tribute to President Lincoln) to the literary (a Walt Whitman poem set to music with additional lyrics by John Murphy "the story of my life is really shocking/out of the cradle endlessly rocking") to the sublime: ("Laundry Boy" replete with baconstrip undies for visual aids). Through all of this, the band proved that Mente has yet to exhaust its seemingly endless wellspring of lyrical and songwriting brilliance.

Sadly, the show ended and I found myself standing outside of the Rat, the rain gently falling on my head, when I ran into fellow Mente-lover Billy Ruane who was, in his own words, "off to the loony -bin." Fair enough, I thought as I pondered the possibility of contracting pneumonia and we walked off to the T stop satisfied that we had seen enough rock and roll in 45 minutes to last us through the weekend. (Derby)